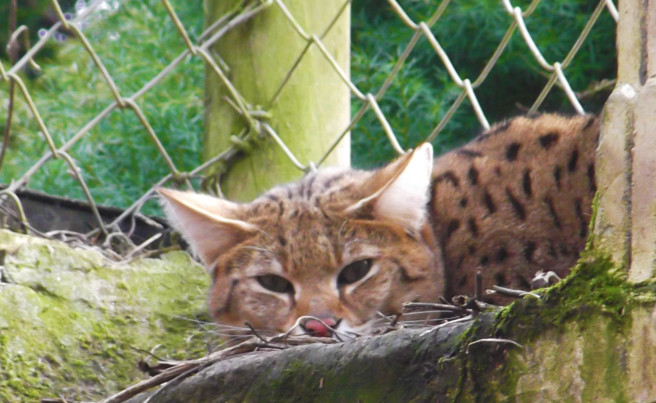 Savannah cats, Willow and Tember, arrived at Porfell from Holland at 9.10 on Saturday night, 4th February 2012. They’ve spent the last four years at the AAP Sanctuary for Exotic Animals after having been seized at Schiphol Airport in the Netherlands. They were detained following a flight from the USA because the owners had no CITES papers.

Blood samples were taken and research of their parents’ lineage showed they were classified as Savannah cats (a mix between African Serval and domesticated cats, Egyptian Mau). Porfell Wildlife Park & Sanctuary were asked if they would give a home to these cats. We said yes.

This helps both organisations. It will free up an enclosure at AAP for more rescued or seized animals and we will show through educational talks to visitors why it is wrong to encourage any cross-breeding between wild and domestic animals.

‘These poor creatures are bred purely for financial gain, with no concern for the animal, which belongs neither in the wild nor the home. Buying them encourages large scale business in breeding and supplying to the pet trade of unnatural animals  kept in unnatural environments. They invariably become a problem, lead a miserable life and die prematurely.’

Now at least Willow and Tember will have a ‘Home for Life’ at Porfell. They’ll live in a safe, natural enclosure and receive proper nutrition in a caring environment.

There are 2 comments. Add Yours.

Thank you so much for rescuing Timber and Willow Porfell and AAP! I am sure they will have a beautiful life in your sanctuary.