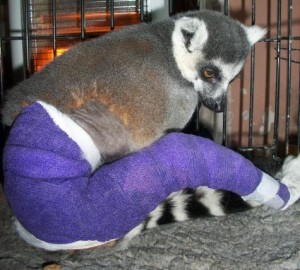 Poor Stumpy everyone’s favourite lemur.(He runs free in the park and likes to sleep in the house). He’s always begging for bananas from the staff. Stumpy had an accident on Monday night and had to have an operation.

Today, Stumpy had some of his stitches out. He just let her do it while he stayed in my arms. You wouldn’t think he is a wild lemur.It took two vets two hours to do the skin repair and graft, it is going well but some of the skin looks like it will break down but it should be ok. He has to go back on Monday, so keep your fingers crossed.

You may remember our poor Stumpy (one of our Ring-Tailed Lemurs) needing to have an operation on his leg after an accident. He has been an amazing little trooper and is doing great. Now, after 8 weeks of being kept inside, his leg has healed fabulously and the fur will soon start growing back. He looks as though he has little fluffy socks on at the moment.

I would like to send out a heartfelt thank you to the support we recieved for Stumpy, he is doing great and we hope to see him back out and having a swinging time in approximately 6 weeks!

There are 2 comments. Add Yours.

I read in the Plymouth Herald that you were trying to raise money for the operation to fix Stumpy’s cataracts. How much is needed and what is the best way to donate to this fund?

Hello Ash,
If you have a PayPal account you can send a donation to wendywinstanley@hotmail.com

I sent an email to the park to ask the same question and that is what I was told to do. Alternatively if you want to send a cheque you can send it to the park directly but put a note in so that they know that your donation isfor Stumpy.
Hope this helps
Love Mal.x